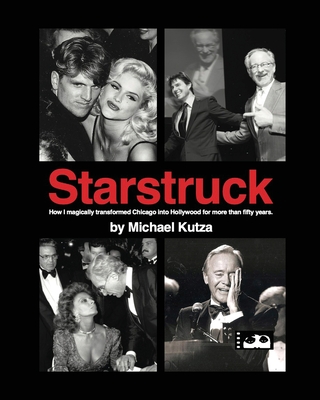 "For many of us, Michael Kutza brought the great city of Chicago to life with his infectious love of film."

- Oliver Stone, Oscar(R)-winning director of Platoon, JFK, and Born on the Fourth of July

"Michael is the real deal. He has heart, a great sense of humor, and he loves films for all the right reasons. I am blessed to call him a friend."

"Michael Kutza has that rare combination of talent and guts. He put his own reputation on the line by showcasing new talent at the Chicago Film Festival before they had been anointed by the Hollywood establishment."

- Taylor Hackford, Oscar(R) winner and director of Ray, White Nights, and An Officer and a Gentleman

"Michael Kutza, through his passion, creativity, and love of cinema, brought the world to Chicago and Chicago to the world."

- Andrew Davis, director of The Fugitive, Collateral Damage, and A Perfect Murder

Long before there was SUNDANCE, TRIBECA, and TORONTO, there was CHICAGO and a young kid from Chicago's West Side named Michael Kutza. He decided that his city needed to see what it was missing around the world in international cinema and the glamor of Hollywood. So, the founded the Chicago International Film Festival in 1964, with the help of silent screen star Colleen Moore and legendary film director King Vidor.

What followed was a roller-coaster ride that lasted for better than half a century, with Kutza presiding over a gathering that throughout the decades hosted a veritable Who's Who of the film world - from Harold Lloyd to Clint Eastwood, Bette Davis to Viola Davis, Steven Spielberg to Spike Lee, Guillermo del Toro to Jodie Foster, Lauren Bacall to Al Pacino. At the same time, the festival introduced a plethora of new talent that would go on to revolutionize the movie business, from Martin Scorsese on.

Starstruck: How I Magically Transformed Chicago into Hollywood for More Than Fifty Years is Kutza's rollicking, provocative, racy, colorful, irreverent show business memoir culled from his decades rubbing elbows with the giants of film at both the Chicago Festival and numerous other festivals around the globe. It includes many of the lowlights as well as the highlights of a life lived just off-screen.